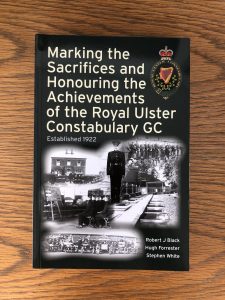 The book has been released to Mark the Centenary of the RUC GC and is titled “Marking the Sacrifices and Honouring the Achievements of the Royal Ulster Constabulary GC”.

The authors, two police historians (one of whom served in the RUC GC) and a former senior officer with extensive international experience, have produced a wealth of information that will be a treasure trove for students, researchers and anyone interested in the story of policing.

Central to this work is a strong message that the efforts of all those men and woman who served in the RUC, often at great cost, should be respectfully remembered and their service commemorated.

The book is priced at £20.00 per copy, and can be purchased from the RUC GC Foundation Office.