Robert (Roy) Black’s definitive work covering the Honours and Medals awarded to the Royal Ulster Constabulary GC from its formation in 1922 to its incorporation into the Police Service of Northern Ireland in 2001 will be on sale from 2nd June. 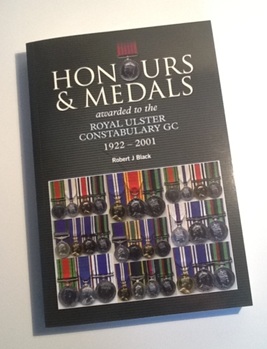 The Royal Ulster Constabulary GC is intrinsically linked to the turbulent history of Northern Ireland and will be judged by future generations as to the part it played in this history on the facts and how they are presented. One of the yardsticks available for this judgement will be the awards to the Constabulary for gallantry and distinguished service and the circumstances that merited such awards. It is the intention of this book to supply the facts and let the reader draw his or her own conclusions.

This book will appeal to both the serious medal collector and members of the wider policing family in Northern Ireland. It will also be of interest to the large body of individuals outside of Northern Ireland who maintain an interest in policing, our history and have an affinity with those who served during difficult times.

In his foreword to the book former Assistant Chief Constable Stephen White writes – “Roy has performed a great service to the Royal Ulster Constabulary George Cross and indeed to wider society, including police historians and researchers, by painstakingly gathering and presenting the information collated in this publication. The RUC’s story is in my opinion, one of dedication, service, bravery and professionalism and, as so aptly illustrated by this book, about ordinary men and women performing extraordinary actions – often above and beyond the call of duty. Roy Black has “done them proud””.