“I BELIEVE WE HAVE A POSITIVE STORY TO TELL”. 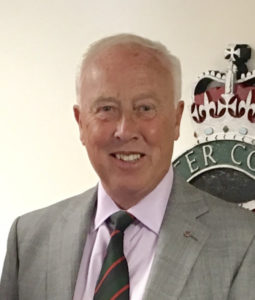 I am indebted to the editor for agreeing to this article. I know many readers have served in, or have close connections with, the RUCGC so I am grateful for this opportunity to write to you.

Since my appointment as Chairman of the Royal Ulster Constabulary GC Foundation, one month ago, I have been meeting and talking to as many members of the RUCGC family as possible – from Cookstown to Antrim and from Newtownards to Londonderry. As I said on the day of my appointment, “I feel very privileged to be offered the opportunity to lead the Royal Ulster Constabulary George Cross Foundation, particularly so since I am its first chairman to have served in the Royal Ulster Constabulary. The Foundation has a mandate which is very close to my heart – to mark the sacrifices and honour the achievements of the RUCGC and I will do all in my power to ensure that this mandate will be at the centre of all our activities. My aim is to provide visible, inclusive and empathetic leadership to a Foundation that is proud of the RUC’s history while being meaningful to our stakeholders and outward-looking for those interested in learning about policing and the positive role it plays in society”.

As I see it, my first tasks will be: to raise the profile of the Foundation; to ensure that those interested know exactly what its main functions are; and, to identify and engage with all stakeholders. My hope is that communications and consultations will be enhanced and that we will work in partnership with others to achieve our legally mandated objectives. I am also very keen to proactively represent all those who served during dangerous times and will do all I can to prevent their service, professionalism and dedication being disrespected and undermined.

The Foundation is about the Royal Ulster Constabulary and its sacrifices and achievements, not specifically the award of the George Cross which is only one (albeit very important) achievement. I understand why some people think we are the George Cross Foundation but that is a post nominal signifying Our Sovereign’s recognition of the RUC’s outstanding gallantry during the onslaught of terrorism. Another point to note is that, from the outset, there was recognition that many bodies already exist such as the Widow’s Association, the DPOA, the NI Retired Police Officers Association and the Local and Voluntary Welfare Groups, to name only a few, and they do tremendous work. The Foundation is encouraged to consult them and work with them on joint initiatives. My hope is to continue and enhance the already excellent relations that exist between the Foundation and these groups. One other point to note is the requirement for the Foundation to be future focussed and support innovations in policing. We currently do this by awarding bursaries to serving PSNI staff and for the past six years, as a Foundation trustee, I have led this initiative which has seen almost twenty PSNI officers and specialists visit countries around the globe to bring back ideas to enhance their own careers and policing in general.

In January the Department of Justice will appoint five new trustees to work alongside me and our two excellent office staff. However, without the dedicated support of over thirty volunteers who act as guides and maintain our Memorial Garden we would not be able to operate. A tour of the garden, with its sculptures commemorating various aspects of the RUC’s story and a series of information boards detailing the history of policing in Northern Ireland, is highly recommended to any readers who have not already visited it. It contains an ‘Area of Peace’ in which the names of those police officers who died in service or who died as a result of Troubles-related violence are listed on a series of granite tablets. It is a sombre reminder of individual and group sacrifices.

Whenever the new board of trustees is in place, my hope is that we will continue the good work of our predecessors and, in consultation with all interested parties, consider new initiatives that will appropriately mark the sacrifices and honour the achievements of those I was proud to serve alongside. I believe we have a very positive story to tell and, as 2022 approaches, much to celebrate and commemorate in our centenary year. As debate continues about how we, as a society, deal with the past, my focus will be highlighting the RUC’s outstanding history of service and its proud legacy and, in particular, challenging those who attempt to rewrite history or inappropriately try to equate terrorist perpetrators with courageous public servants who put duty first – often at great cost. I welcome offers of help and constructive suggestions about how we in the Foundation can do more to ensure we provide an accurate and fitting commemoration of the RUC’s sacrifices and achievements. Finally, I would like to take this opportunity to thank all those who encouraged me to apply for the position and sent me their good wishes.

ARTICLE FOR THE NEWTOWNARDS CHRONICLE COUNTY DOWN SPECTATOR

Follow the link below to read more about the RUCGC Foundation and our new Chair Mr Stephen White in an interview with the Belfast Telegraph.