Dear Colleagues, may I start by wishing you, and all your families, a very happy New Year and by thanking you for all the excellent support given to the Royal Ulster Constabulary GC Foundation.

As a new year, in fact a new decade, begins I thought I should write a short message to review the past twelve months and also to look forward to what the RUC GC Foundation plans to achieve in the future.

It seems only a short time since November 2018 when I had the privilege of being appointed as Chairman of the Foundation but together we have done a lot since then. In the past year the Foundation has had four new trustees appointed and together we intend to do all we can to achieve our objectives as stated in law: “to mark the sacrifices and honour the achievements of the RUC”.

During 2019 we continued to give priority to the ongoing refurbishment of the RUCGC Memorial Garden. We continue to receive many visitors and indeed in November the Garden, and its volunteer gardeners and guides, was featured in BBC Radio Ulster’s “Gardener’s Corner”. In January we celebrated the successful completion of research by our 2018 RUCGC Foundation Bursary recipients and launched the 2019/2020 Scheme. Six new bursary recipients have now commenced their research and we wish them well.

In April we held our first ever RUCGC Foundation Annual Conference bringing together our Stakeholders Group, our Volunteers, representatives of RUCC Association branches throughout Northern Ireland and various “Friends of the Foundation” who have expressed interest in the RUC. This event was very worthwhile and will be repeated as it enabled the Foundation’s Board of Trustees to consult widely. The result was a plethora of ideas and suggestions – many of which have been acted upon already.

In June we held our Annual Service in Omagh and it was extremely well supported. Throughout 2019 we continued to enhance our Oral History Project and we hosted many visits by local and international students seeking to learn about the role of the RUC. We continued to engage with and share information with like-minded bodies such as the Victoria Cross and George Cross Association, Brooke House, MAPS (Omagh), Decorum NI, the British Legion and the Combined Irish Regiments Association. We participated in numerous remembrance and commemorative services here in Northern Ireland and in London, Glasgow, Tulliallan, Dublin and the National Memorial Arboretum.

During 2019 the 50th Anniversary of “Operation Banner” was supported and we remembered Constable Victor Arbuckle the first officer murdered in the “Troubles”. Our November RUCGC Remembrance Service in the Memorial Garden was extremely well supported and, as suggested by stakeholders, our service this year was interdenominational and for the first time supported by Her Majesty’s Lord Lieutenancy. These, along with an excellent volunteers training day at Brooke House and the Share Centre, are only some of the highlights. I am extremely grateful for all those who contributed to their success and participated in them.

Sadly we lost some close colleagues during the year, including the Foundation’s first Chairman Jim McDonald. We remember them all and their loved ones.

As we go forward we will strive to meet all our objectives in consultation with all our stakeholders. We will build on our early centenary plans for 2022; we will put a lot of thought into how we appropriately use donations via a sub-committee; we will continue to outreach to communities in order to educate and enlighten others about the role of the RUC; we will consider legacy issues and defend the RUC’s reputation whenever possible; and, we will build on our already good cross border relationships - for example with the Garda and the HARP Society. We have a lot to look forward to. So, once again, allow me to record my sincere thanks to the many people who have ensured the Foundation achieved its main objectives during the past twelve months. To the trustees, staff stakeholders, friends & particularly our volunteers, thank you very much – I look forward to working with you in the year ahead. 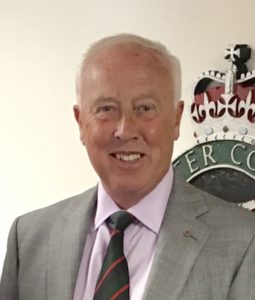