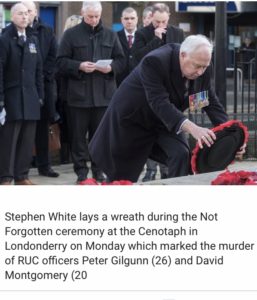 Two RUC officers killed in a 1972 IRA gun attack on their vehicle in Londonderry were remembered at the War Memorial in the city on the anniversary of their deaths.

Sergeant Peter Gilgunn (26) and David Montgomery (20) were the first of 20 RUC casualties that year.

Chairman of the RUCGC Foundation Stephen White, who laid a wreath at the cenotaph, said it was important not to forget the sacrifice and dedication of the RUC officers.