Her Majesty The Queen

As Chairman, and on behalf of all trustees and volunteers, of the Royal Ulster Constabulary GC Foundation, we are deeply saddened to hear of the passing of Her Majesty The Queen. We wish to offer our sincerest condolences to our Royal Patron, His Majesty King Charles III and to all the Royal Family, at this the saddest of times, as we mourn the loss of our wonderful sovereign Her Majesty Queen Elizabeth II.

On 23rd November 1999 she awarded the George Cross to the Royal Ulster Constabulary for collective gallantry. In

Chairman of the RUC GC Foundation Professor Stephen White OBE, presenting PSNI Chief Constable Simon Byrne with a copy of “Marking the Sacrifices and Honouring the Achievements of the Royal Ulster Constabulary GC” 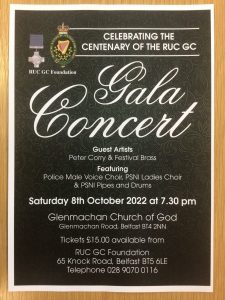 The RUC GC Foundation will be hosting a Gala Concert to Celebrate the Centenary of the RUC GC, on Saturday 8th October 2022 at 7:30pm in Glenmachan Church of God.

Tickets are available from the RUC GC Foundation office on the following number: 02890 700116

The book has been released to Mark the Centenary of the RUC GC and is titled “Marking the Sacrifices and Honouring the Achievements of the Royal Ulster Constabulary GC”.

The authors, two police historians (one of whom served in the RUC GC) and a former senior officer with extensive international experience, have produced a wealth of information that will be a treasure trove for students, researchers

The Chairman, Trustees and Volunteers attended a Remembrance event within the RUC GC Memorial Garden on Wednesday 1st  June 2022, to mark the formation of the RUC GC, and the sacrifices of 314 RUC GC Officers who were murdered since the RUC GC was established on 1st June 1922.

The event was also attended by the Vice Lord Lieutenant for Belfast, Sir Nigel Hamilton KCB and PSNI Chief Constable Simon Bryne QPM.  Immediately following the Remembrance event, Certificates were presented to all Volunteers to not only mark this occasion, but also

The 100th Anniversary of the Royal Ulster Constabulary

The Royal Ulster Constabulary GC Foundation held a very successful Service of Thanksgiving in The Cathedral of St Anne, Belfast which was conducted by the Very Reverend Stephen Forde BSc, Dip Theol, Dean of Belfast.  Although our Patron HRH The Prince of Wales was unable to attend in person, he was still able to send a deeply supportive message via

This Sunday, close to 500 people will attend a thanksgiving service in Belfast’s St Anne’s Cathedral to mark the centenary of policing in Northern Ireland.

They will recall loved ones who were cruelly cut down by terrorists during the ‘Troubles’.

They will silently think of others who died during their police service and the individuals who took their own lives.

The Royal Ulster Constabulary George Cross (RUC GC) Foundation is to mark the centenary of policing in Northern Ireland with a host of major events to highlight the commitment, sacrifice and distinguished service of officers.

The Chair of the RUC GC Foundation, Stephen White OBE, said the anniversary will see the emphasis placed on remembrance and acts of courage and heroism since the formation of the RUC in June 1922.

The centenary will be marked at Church Services in St Anne’s Cathedral, Belfast